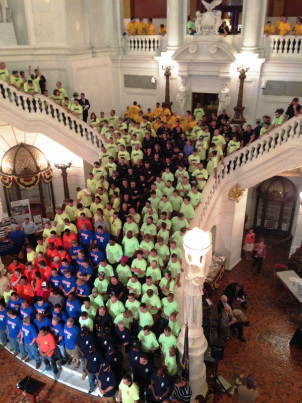 Today, nearly 1000 union building and construction trades apprentices, apprenticeship and training program coordinators and instructors from twenty different building trades crafts, came to the State Capitol for Apprentice Awareness Day in Pennsylvania, to communicate with elected officials on the value of jointly sponsored, privately financed, labor/ management facilities for skills, continuing education and classroom training programs as a career path to stable, family sustaining jobs with family sustaining benefits. Each of the participating apprentices is a student trainee in a state registered, governmentally approved and supervised classroom and on the job training program that meets or exceeds affirmative action guidelines and admits participants on the basis of merit.

Frank Sirianni, the President of the Pennsylvania State Building and Construction Trades Council, noted that opportunities for employment in family-sustaining jobs in the construction industry depend on workers securing training in technical skills, customer service and job safety.

“There are over 7,000 active building trade apprentices being educated and acquiring skill sets for tomorrow’s work force right now in every corner of Pennsylvania…that is more than 80% of all apprentices in the Pennsylvania construction industry,” said Sirianni. “The highly technical and complex jobs required to function in the construction work environment of the future depend upon having a well-trained work force. That is exactly what the apprentice programs participating in the Pennsylvania Apprentice Awareness Day provide to the State’s economy.”

“Apprentice Awareness Day is a way for recent high school graduates, technical school graduates, veterans and our elected officials to learn about opportunities in the construction industry and the importance and value of our apprenticeship and training programs in Pennsylvania,” said Sirianni. “It is also a great way for apprentices to meet their elected officials.”

Michael Schurr Education Director of the Nationally recognized Finishing Trades Institute and a Member of the Commonwealth of Pennsylvania Apprenticeship and Training Council stated that all Pennsylvania building and construction trades apprentice programs are funded through a collectively bargained and privately funded cooperative effort between various crafts unions and employers and they are designed to provide apprentices with life-long skills and careers. Typically, according to Schurr, these programs are funded through active workers in the industry having a designated portion of their hourly earnings earmarked and set aside to privately fund, without taxpayer dollars, the apprenticeship training programs in each of the individual construction trades and crafts.  In this regard Schurr noted that, “Nationally Building Trades Unions and their signatory contractors invest over $ 1 Billion annually of completely private funds in apprentice and journeyman training activities, in addition to literally tens of millions of dollars in training plant and equipment. Additionally, Building Trades Unions and their signatory contractors annually invest in excess of $10 Billion in apprentice wages and benefits around the country.”  Schurr went on to describe the capacity of the Building Trades Union sponsored apprenticeship programs in the country explaining, “If our Joint Apprenticeship and Training Committee system was a college or university, it would be the second largest in the United States…nearly five times larger, for example, than Penn State University.”

“These jointly sponsored, labor and management facilities for skills, continuing education and classroom training serve as a valuable asset to Pennsylvania’s economy because they cost neither participating apprentices nor taxpayers anything to attend. They are privately funded and they provide immediate job opportunities both during training and upon completion of the rigorous courses in every trades in the construction field.”

Apprentice Awareness Day Coordinator, Bob O’Brien, said it was important for Pennsylvania’s elected officials to understand the value and scope of union apprentice programs because highly-trained workers can deliver quality construction jobs on time, on budget and minimize the number of costly safety based accidents, skill based delays and quality control issues and violations that come with construction jobs undertaken by unskilled or poorly trained workers.

“When an employer uses our union apprentice programs to secure and employ workers for a particular project they can be assured that the work force will have a high degree of skills training with an emphasis on quality work products and safety on the job,” said O’Brien. “That combination is an essential factor in guaranteeing that the project gets completed correctly the first time out, and minimizes long term costs by eliminating the need for post-construction corrections of shoddy work.”

For more information about Apprentice Day on June 10th and Union Building Trades Apprenticeship opportunities in the construction industry, visit the PACA web site at www.apprentice.org.

For more information on the Pennsylvania Building and Construction Trades Council, go to the Council’s web site at www.pabuildingtrades.org or contact them at 717-233-5726.

As you are out working in the cold this winter, be aware of the signs…