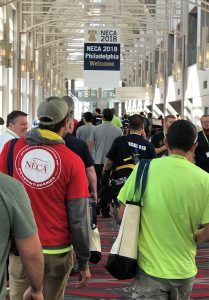 On September 30, 2018, over 2,500 electrical apprentices assembled in Philadelphia for the National Electrical Contractors Association (NECA) 2018 Convention in celebration of Apprentice Awareness Day.  Two buses full of York and Harrisburg electricians launched out of the York Training Center.  As we arrived, apprentices from all over the northeast U.S. poured into the Pennsylvania Convention Center.  It quickly became clear that it was a good day to be an apprentice in the IBEW-NECA family.  Apprentices were given several t-shirts from different training partners as we funneled into one of the large banquet rooms.

Welcoming remarks were made by IBEW Local 98 Business Manager John Dougherty, IBEW Local 98 Training Director Michael Neill, and Electrical Training Alliance Executive Director Todd Stafford.  The theme across all of their comments was that as an IBEW apprentice, the sky is the limit.  They encouraged apprentices to take their training seriously and prepare to be the next leaders of the electrical construction industry.  They were followed by Dr. Michael Callanan who gave practical steps toward developing leadership abilities.  He shared this video of the Death Crawl scene from Facing the Giants.  He used Brock as an example of how apprentices can be leaders on their crews without needing the title of Journeyman or Foreman.

His speech wrapped up with three imperatives for each apprentice:

The apprentices then got to hear directly from IBEW International President Lonnie Stephenson, NECA President David Long, and NECA CEO John Grau.  They explained the current state of the industry, their vision for the future, and took questions from the crowd in a town hall style discussion.  Each speaker described how their career started as IBEW apprentices which opened doors they never thought to consider.

After lunch, the apprentices were released to visit the Trade Show floor.  The NECA Trade Show is “the largest gathering of manufacturers and distributors for electrical professionals in North America” (NECA 2018).   The show included Premiere Training Partners like Milwaukee Tools, Klein Tools, Ideal Industries, Southwire, FLUKE, Lutron, and so many more.

A special thanks to Milwaukee Tools for being a sponsor of this event and covering the cost of all of the buses.  We are grateful that our apprentices were able to attend this event and make connections with key leaders in our industry. 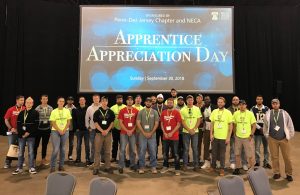 Class of 2022 Volunteers at JA BizTown